KP Snacks, are pleased to announce the launch of two new Darts inspired limited edition flavours to the existing McCoy’s range from the beginning of September as well as a new on-pack promotion offering consumers money-can’t-buy prizes. 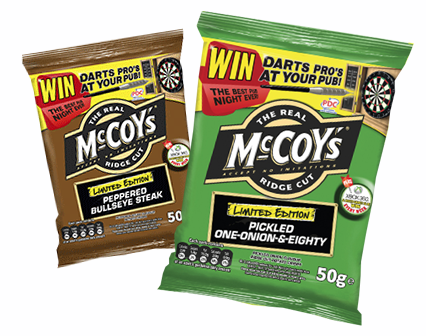 Revelling in the sporting spirit of the brand’s official partnership with the Professional Darts Corporation (PDC), the aptly named Peppered ‘Bullseye’ Steak and Pickled ‘One Onion and Eighty’ are a darts-themed twist on classic favourites designed to drive consumer interest and rate of sale for retailers.

On-pack promotion hits the bulls eye
The new limited edition flavours will feature an on-pack promotion offering consumers the chance to win a once in a lifetime visit from two top level PDC players to their local pub, including all food and drink for the winner and three friends.

On top of this there will be a weekly prize draw where consumers can win an Xbox 360 and a PDC games bundle. To enter consumers simply scan the QR code on the back of the pack or visit mccoys.co.uk/darts or facebook.com/mccoyscrisps where they will be challenged to play Darts pro in a virtual darts game. Perfect partnership to drive sales for retailers.

The promotion will not only feature on the new limited edition packs, but run across the entire McCoy’s range which includes Handypack favourites, price marked packs, multipacks and sharing bags. The limited edition launch and on-pack promotion will also be supported by a social media campaign to drive traffic to the website and Facebook page, creating further brand awareness and in turn increasing sales for retailers.

George Johnston, Marketing Director of Bagged Snacks, KP Snacks said:
These new flavours are sure to entice darts enthusiasts, fans of McCoy’s and simply consumers eager to try something new. The on-pack promotion is designed to drive incremental sales for retailers, as consumers have to pick up a pack to be in with the chance of winning the fantastic prizes we have up for grabs. We therefore recommend that retailers stock up on the new limited edition flavours, adding them to their existing McCoy’s offering to capitalise on the popularity of darts and of course McCoy’s, the original ridge cut Man Crisp.