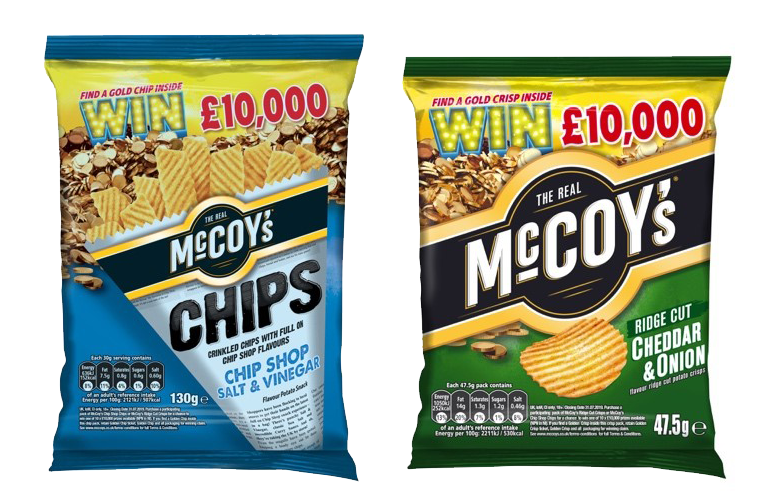 The competition gives shoppers the chance to win £10,000 instantly if they discover one of 10 golden crisps or chips in McCoy’s PMPs, Grab Bags and sharing packs.

Recurring annually since 2017, this years ‘Win Gold!’ is bigger and better than ever with twice as many chances to win as previous years. The campaign, launching 17th March, aims to drive rate of sales for independent retailers whilst giving consumers another exciting reason to keep McCoy’s as their number one choice at lunchtimes and sharing occasions. The campaign will be supported by in-store shopper and display activation across convenience and impulse, along with social and digital media amplification.

Alongside the shopper opportunity to win, McCoy’s is rewarding retailers with a £1,000 donation to support a charity of their choice for every winning pack sold from their store.

Claire Cooper, Brand Manager at McCoy’s says: “Customers expect big, full-on flavours from McCoy’s so we wanted to enhance that experience even further by bringing them more excitement every time they chose a McCoy’s Grab Bag or pack of McCoy’s Chips. As one of the most successful brands under the KP Snacks portfolio, the competition has proved highly successful over the last two years and rewards loyal McCoy’s consumers as well as galvanising the rate of sales for retailers.”

Launched 30 years ago, McCoy’s is now the 4th biggest brand in CSN with a £125.3m RSV and growing at +2.7% . The full range covers all shopper missions and consumer needs. Over 9 million households purchase the and every year, with an excellent repeat rate of 55%, and McCoy’s Salt & Vinegar and Flame Grilled Steak are the no.1 and no.2 best-selling meal deal choices in a leading retailer.

The promotion will run until the end of June across all McCoy’s 47.5g Grab Bags, all McCoy’s 70g £1 PMPs, and McCoy’s Chips 130g sharing packs in the more-ish Sea Salt, Salt & Vinegar and Curry Sauce flavours.