The Hundred today unveiled the kits for the eight new teams in the 100 ball cricket competition. Each team will be partnered by a different KP Snacks brand in their role as Official Team Partner, helping to grow cricket and encourage families to get active. 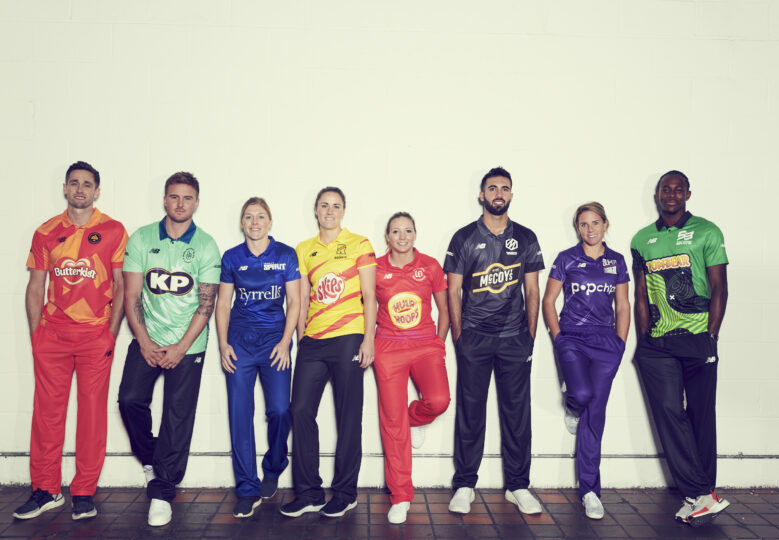 Kevin McNair, Marketing Director KP Snacks, said: “We’re excited to be a part of revealing the designs of the official kits in the next stage of our long-term partnership with The Hundred, which aims to encourage families across the UK to be more active through cricket. There has always been a friendly rivalry between our brands and we’re looking forward to seeing who comes out on top next summer.”

The squads of the eight teams are also starting to take shape, as England men’s and women’s World Cup winning players, including Eoin Morgan, Heather Knight, Ben Stokes, Nat Sciver and Jofra Archer, have all officially been selected today for The Hundred.

For the men’s competition, England Test captain Joe Root has joined Trent Rockets, partnered with Skips, while England White Ball captain Eoin Morgan will play for London Spirit, sponsored by Tyrrells. England’s star bowler of the summer Jofra Archer has joined Southern Brave, who will feature POM-BEAR on their shirt, and all-rounder Ben Stokes will play for Northern Superchargers sponsored by popchips.

The eight teams in the women’s competition have also chosen their first players, each announcing two of the Centrally Contracted England Women players in the first stage of the Player Selection Process. England captain Heather Knight will skipper London Spirit, sponsored by Tyrrells. Anya Shrubsole – Knight’s vice-captain for England – will join up with Danni Wyatt at Southern Brave, featuring POM-BEAR. Nat Sciver will join Trent Rockets partnered by Skips, alongside Katherine Brunt, while Manchester Originals, sponsored by McCoy’s, welcome Sophie Ecclestone, the ICC’s Emerging Player of the Year for 2018.

Sanjay Patel, Managing Director of The Hundred, added: “The Hundred’s partnership with KP Snacks will enable us to introduce cricket to more families. Our collaborative goal is to demonstrate the many benefits that playing cricket has and encourage balanced, healthy and active lifestyles. We are looking forward to working together to grow the competition over the next few years.”

The final stage of the men’s Draft is set to provide an historic first for British sport when it is staged on Sunday, October 20.  It will be broadcast live on Sky, with extensive coverage across the BBC.

The five-week competition will be played at the height of summer, starting July 2020, featuring eight new city-based teams in Manchester, Leeds, Nottingham, Birmingham, Cardiff, Southampton and two in London (Lord’s and the Oval).

For the latest news and priority access to tickets visit thehundred.com