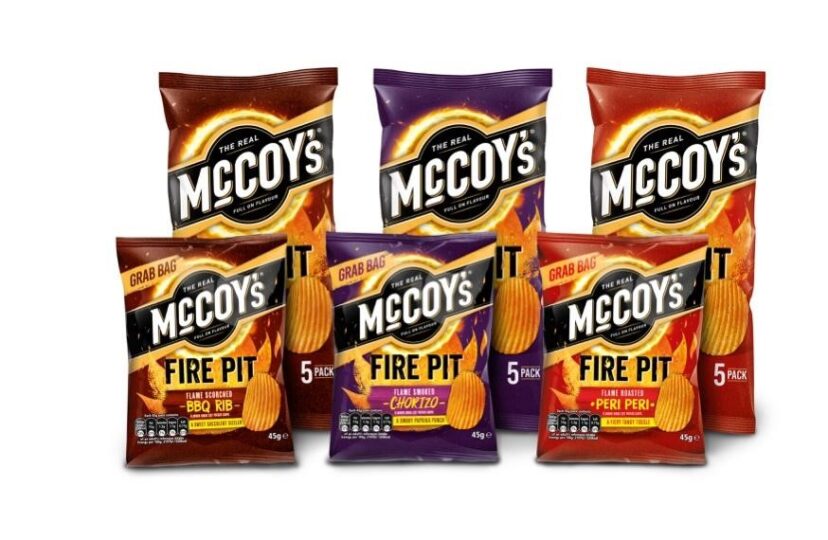 McCoy’s, the UK’s number one ridged crisp brand[1] by KP Snacks, has unveiled an exciting new creative brand platform with the launch of a £2M McCoy’s Fire Pit above the line campaign on February 15th.

The new creative, which will run across all McCoy’s brand advertising, features a cheeky, playful and mischievous ‘beast’ who represents extreme flavour cravings and whose arm appears in everyday, real world scenarios to demand the only snack that will satisfy its flavour cravings, McCoy’s. The campaign includes a rallying call for consumers to experience a full-on McCoy’s flavour hit with the tagline ‘Don’t Deny the Beast’.

The new creative will initially appear in a £2M TV/VOD, poster and online campaign to support McCoy’s latest NPD, McCoy’s Fire Pit. The TV ad features a hungry, bored and unsuspecting office worker who is visited by our cheeky and playful ’beast’ looking for a McCoy’s Fire Pit fiery embrace.  A 20″ TV ad will run from February 15th for three weeks, with a 10″ cut broadcast until the end of May. McCoy’s Fire Pit out of home poster campaign, with the caption “Forged from Fire to Ignite your Desire”, will run until June, with a social media campign running until July.

Launched in January this year, McCoy’s Fire Pit takes ordinary BBQ flavours to the next level with three sizzling flavours including Flame Roasted Peri Peri, Flame Smoked Chorizo, and Flame Scorched BBQ Ribs. With McCoy’s unmistakable boldness, the new range has a flavour and spice level to suit all tastes. The launch taps into the fastest growing CSN flavours of Spicy (+7.1%), Meaty (+5.8%), and BBQ (+4.5%)[2], with smoky, chargrilled flavours traditionally associated with cooking meat slowly over an open fire. The pack-a-punch crisps have already proved instantly popular with consumers

Sue Mackay, Marketing Manager at KP Snacks comments, “McCoy’s Fire Pit has already been phenomenally well received by consumers and we’re confident the campaign will drive further appetite for the brand and product. The new creative is both fun and disruptive and is sure to capture the attention of consumers with a typically maverick McCoy’s approach.

“Flavour is the most important factor in CSN and our new McCoy’s Fire Pit range delivers a delicious new twist on classic BBQ flavours, whilst providing something fun and innovative to the category”.